Oops it has been a while since I last posted but I have actually been working on the game!

Creating these classes allows me to use the tweening library to animate buttons, words and letters appearing and disappearing. I also added handlers to these classes so that they can callback into the main game code when things happen such as a player tapping a button.

Here is a class diagram of the classes in the game:

In the GameScreen’s Update() method I added some code to increment a time value every second of play. This method also holds a game over check which bounces the user to the game over screen if they exceed 120 seconds of time. For the moment I have also added a simple bar sprite that I resize to represent the time that has passed. I turn this into a more self contained class the future.

Here is the code for the Update() method:

You will also notice the score increment that adds 5 points for every second that the player has survived.

The bulk of the game logic sits in the HandleLetterButtonRelease() method. This is called when a letter button is pressed by the Keyboard class:

I also dropped in some placeholder SFX and background track to round things off. Here is a clip of the final result: 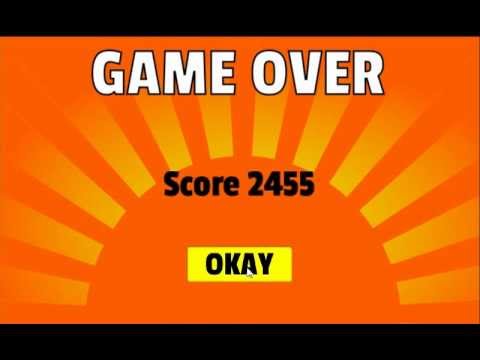 Proud of my work I handed the game over to Mrs Gremlin… she hated it! After a Q&A session it turns out that a) she doesn’t really like word games but more importantly b) the word list was awful.

Even though I had sanitized the list, she felt that the words were just too obscure. For instance “fashioned” was “not a real word”. So I went back to the drawing board and found a list of the 1000 most common words from texts in the Gutenberg Project. I quickly wrote some code to score each word (using the same algorithm I detailed here), sorted the list and dropped the list into the game.

This time Mrs G got into the game (particularly when she found out my top score was 7000ish which gave her a target to beat).

Since then I have shopped the game around my friends and acquaintances to get feedback. The highlights of this feedback are:

So quite a bit to work on. Having said that no one thought the game was terrible and most played several games so I’m hopeful that I have something interesting here.