Since Jonah asked for it, I have generated a KML file of the Auckland bus stop data. If you have Google Earth installed then click on this link to see the stops overlaid on an actual map: http://www.rabidgremlin.com/viz/auckland_bus_stops_kml/auckland_bus_stops.kmz

A couple of days ago I discovered that Auckland Regional Transport Authority (ARTA) make all of their bus schedule data available for download from the maxx.co.nz site. The data is in the Google Transit Feed format, which means that it consists of a bunch of comma separated value text files, describing things like stops, routes, trips and calendars.

I decided to see what I could do with this data. Below is my first attempt. It is a “density” map of all the bus stops in Auckland. 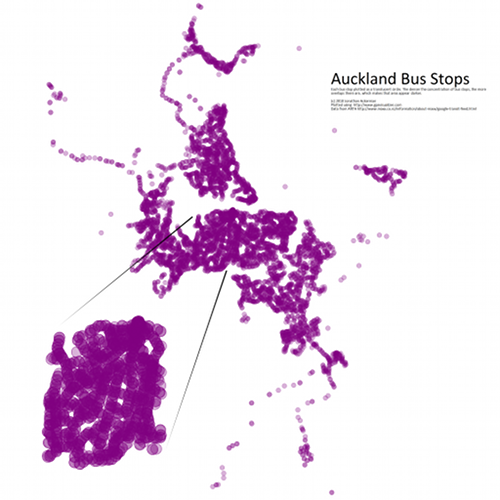 Click here for a hi-res version that allows you to pan and zoom.

The initial version of the map only took about 30 minutes to create but I have spent a few hours tinkering with it since then.

Here is quick guide to the process if you want to try something like this yourself:

If I get some more time I will try create some more visualizations. I’m thinking  it would be interesting to merge the bus stop density data with some population data. Also an animation showing 24hrs of bus movement compressed into a couple of minutes would be pretty nice too.

I love the web and its ability to feed my brain (whilst sucking up my free time). The problem of course is that there is so much cool stuff out there that you just don’t know about.

For instance, on Digg I came across a nice visualization showing the edits to the “Evolution” article on Wikipedia.

I was curious to see what the source of the visualization was but there was no credit on the image. Looking in the comments for the post I didn’t find anything about the source but I did find this link which shows the public acceptance of evolution in various countries around the world. It is interesting to see where the USA sits on the chart.

Mmm, looking at the URL for the original visualization I could see that the image was hosted on Amazon’s S3 service and contained a reference to twittypic. A quick Google search turned up this site twittypic.com which monitors Twitter looking for images and video that are referenced by tweets, in the assumption that things that are referenced to by lots of people would be of interest to others. Nice idea.

Sure enough on Twittypic I found this post which referenced the original picture which was hosted at _http://www.research.ibm.com/visual/images/discover_mag.jpg_ shortening the URL turned up the Visual Communication Lab at IBM. Clicking on their projects link turned up (amongst other interesting things) history flow which was the tool used to create the visualization.