You may have noticed that I haven’t been posting as much as I normally do, part of the reason is my new job, the other reason is Twitter.

If you don’t know what Twitter is, it is a micro-blogging service. Think text messaging but web based with your messages (called tweets) going out into the web for all to see. This may seem like a dumb idea but actually it is incredibly useful.

I’ve had a Twitter account since July 2007 but I hadn’t really been using it. However since starting my new job I’ve been using it as a way of keeping in touch with my ex-workmates. We use to share links and news, ask questions or just make random observations. For this Twitter works a treat.

Apart from following your friends and mates, there are a large number of “famous” people out there who are active Twitter users. For instance Stephen Fry constantly tweets and has one of the largest groups of followers at over 400000 people. It’s been really interesting to follow his recent filming in Mexico, Malaysia and Indonesia.

In the last few months Twitter has really gone main stream. In January it had 6 million users, by February that figure was 8 million and by the end of March it has exploded to 14 million users.

This is where another interesting aspect of Twitter crops up: trends. With so many people tweeting at the same time it is possible to spot trends in what is tweeted about. Here services such as Twitterfall and Twitscoop come into play, they monitor all the tweeting on Twitter and identify these trends. For instance as I type this, there is a spike in tweets referring to glitch, looking at the tweets it seems that Amazon is claiming that it was a glitch that caused all Gay and Lesbian books to be marked as adult content which removes them from many of the searches on Amazon. Not a good look.

A search for tweets containing Air NZ, turns up all sorts of interesting things: @ddotdallas who likes the website’s easy of use or @cyantificNHS a DJ whose records got misplaced by Air NZ.

Of course this kind of feedback is extremely valuable to business but bright-eyed marketing types of course don’t want to just get feedback from their customer’s, they believe that social media can be used to form strong relationships with their customers.

Now I am always a bit skeptical of these kind of ideas but in this case I maybe wrong. Let me relate a couple of incidents that have happened to me in the last month or so.

First off I tweeted about a piece of software called XWiki Watch, which I thought was quite interesting. A few days later I received a thank-you tweek from @eogez. Cool direct contact with someone involved with the product.

My next tale is even better. I came across a product called Rhomobile which looks pretty cool. Unfortunately I thought the enterprise licensing was a bit naff and I tweeted as such.

Here is the “conversation”:

And that last tweet is where it gets real interesting, turns out that upnadam is the ceo of Rhomobile ! So not only did I get a response from the marketing face of Rhomobile (@rhomobile) but I also got a direct tweet and an offer of a good deal from the CEO of Rhomobile. Of course I passed on the offer and perhaps some business will be heading Rhomobile’s way.

These incidents prove to me that Twitter can be a legitimate way for businesses to bond with their customers and potential customers. Perhaps those bright-eyed marketing types are right this time.

So I’d thought I’d give Google’s Friend Connect a whirl. Friend Connect allows you to embed social networking components onto your website. Out of the box you get a members gadget, a wall gadget and a review/rate gadget. Since it is all based on OpenSocial you can add any other OpenSocial gadgets to your site as well.

Here is the quick intro video: 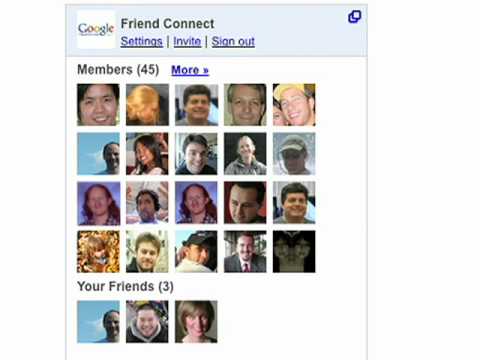 Getting set up is very easy, you simple add two .html pages to your site and then embed some Javascript whereever you want the gadgets to appear.

It took all of 5 minutes to set up the members gadget as the “Friends” box in the left bar of my blog.

Google Friend connect is a direct competitor for Facebook Connect which lets you do similar functions but built around the Facebook API. Facebook Connect is much harder to set up but seems to be gaining more traction with big sites such as Digg.  It’ll be interesting to see who wins this race and if this whole thing takes off.