Last week, interested by the noise on the interwebs about Facebook and privacy, I put together a small app using Facebook’s API that shows exactly what information you are giving away to Facebook enabled sites.

Thinking that others might be interested, I tweeted a link  and shared the app with my friends in Facebook. Now I don’t have a large social network about 220 followers on Twitter and 125 friends on Facebook, but the “like” counter for the app quickly started to grow first 10, then 20 and after a day close to 100!

A couple of days later, somewhat ashamed by how ugly the app looked, I did some work to pretty it up and I added a “privacy score”. I then retweeted the link, did a Facebook status update and went to bed.

The next morning (17 May), I was very surprised to see that I now had 200 “likes” and over 1500 page views. Over the next few days things started to  grow rapidly. I watched anxiously, concerned that my tiny little web server was going to explode…

I also started to wonder how people were actually out finding the the app. Here is what I can surmise from looking at my site logs and analytics.

First off here are the graphs showing the page hits (dark blue) and unique visits (light blue)  per day:

Where did all the traffic come from? 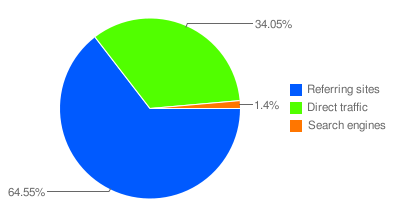 Of course a large percentage of the referring traffic was from Facebook, as my app allowed people to post their “privacy score” for all their friends to see. The post included a handy link back to my app so that others could then easily check their score.

A total of 11.8% of the total visitors to the app came from Facebook. The other referring traffic was from the large number of blogs and websites that posted articles about the Facbook Privacy issue with links back to my app. In fact there were over 100 sites that did link back to the app which is pretty staggering. See the end of this post for a list of some of them.

The direct traffic figure of 34.05% is interesting as it is highly unlikely that anyone was typing the URL to the app (http://www.rabidgremlin.com/fbprivacy) directly into their browser. I can only guess that that these visits must have come from people clicking links in various (non-browser based) twitter, RSS feed and (perhaps) mail clients.

Looking at the data I would suggest that over 45% of the total traffic could be attributed to social networking ! (the 11.8% from Facebook and the 34.05% direct traffic).

I suspect that the primary reason that the app became so popular so quickly was it appeared right when there was the most Internet buzz about Facebook privacy.You can clearly see the strong build up and the equally sharp drop off in traffic as the Internet became enamoured with some other topic.

Now if my app was a commercial product then I would say NO. Around about the same time as my app went live so did several others such as: youropenbook.org, reclaimprivacy.org and Saveface.

I would say that reclaimprivacy.org would be a direct “competitor”. If you take a look at their site they have over  238000 shares and over $3000 in donations. So around 12100% more shares/likes and roughly 60000% more in donations!  BTW I must give a shout-out to Brian for his donation (and yes it is enough to buy a beer in New Zealand, thanks).

Clearly reclaimprivacy.org would be destroying me if we were competing businesses :)

So why did they do so much better?

I don’t believe that it is the “product”, several sites have mentioned that my app provides the most in-depth information.

I could see that perhaps it is because their app looks better but no one mentioned that my app was ugly or unusable.

I suspect that the answer is that of trust, reclaimprivacy.org has a nice domain name, the author released the source code and perhaps more importantly the author (Matt Pizzimenti) is readily identifiable. On the other hand, rabidgremlin.com sounds a bit suspect and I go out of my way to keep my identity secret (not that it would be hard to figure out who I am).

My suspicion is borne out by some of the descriptions of my app, such as this one:

The application is built by rabidgremlin, who doesn’t tell us anything about himself (I’m making an assumption here) and claims New Zealand as his home on his Twitter page. Can you trust the site?

I guess I’ll need to take this into account for future projects :)

The following list shows some the sources of traffic to my app:

One of the most visited posts on my blog is titled “FaceBook:Do you know who is watching you?” which details how to keep your Facebook profile out of the public eye. In light of the MI6 chief/Facebook scandal (his wife obviously doesn’t read my blog), I thought I’d update the instructions so you can avoid suffering a similar embarrassment :)

Google has just updated its advertising system to do “behavioral targeting”, in essence they track you as you move around the web and display ads that are targeted towards you based on what the perceive are your interests.

For instance if you visit a bunch of sports related sites then Google will determine that you are into sports and serve up sports related ads to you.

This is all done using tracking cookies and is built around the Doubleclick tracking infrastructure.

We use third-party advertising companies to serve ads when you visit our website. These companies may use information (not including your name, address, email address, or telephone number) about your visits to this and other websites in order to provide advertisements about goods and services of interest to you.

More importantly what if you don’t want to be tracked ?

Well Google has two pages for you. The first lets you opt-out of the tracking system and the second lets you adjust your Google Ads preferences.

The preferences page is a particularly interesting, in that it shows you the “interest” areas that Google has derived based on your surfing habits. You can also manually add interest areas if you want!

My advice however is to just use a browser add-on such as Adblock Plus for Firefox and you will never have to worry about seeing those ads ever again (you will however disable the blocker for rabidgremlin.com, won’t you? )