A few months ago, I had a group of friends over. Usually we just sit around and socialize, sometimes we play a board games or watch a movie but this time we did something different…. we played Artemis.

So what is Artemis? Well its a multi-player Starship Bridge Simulator where each player is assigned a different station (played on a PC or iPad) of a Starship Bridge. For instance there are helm, weapons, sensor, comms and engineering stations. One player is the Captain who gets to give the orders.

The aim of the game is to work together to complete Artemis’s mission. 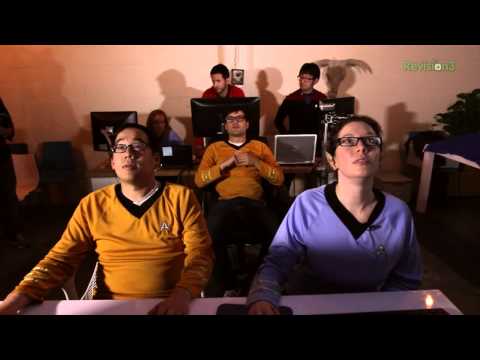 Surprisingly everyone agreed to give it a go and so began the voyage of the plucky Artemis, her dysfunctional crew and their inept Captain.

Installation is pretty straight forward, after you purchase the software ($40 USD) you get an installer that run you on each of the player’s PCs (or laptops in our case). There is no licensing key and the developers rely on an honor system that you don’t share the installer outside of your 6 players. There are also a iPad and Android apps ($2.99 USD) that lets you use a tablet as a station.

One thing that you will need is one PC to act as the server. This PC also drives the view screen which lets the Captain see what is going on since they typically don’t have a PC (and as Captain you then get to yell out things like “Bring up Tactical on the view screen, Ensign Young”). My Dell Zino HTPC wired up to the living room 42-Inch LCD TV worked perfectly for this.

As a minimum you need three players to play: Captain, Helm and Weapons. Players can control more then one station but that often proves to be too tricky in the heat of battle. The game really shines when you have a full crew of 6 and all stations manned.

The game comes with a number of scripted missions but in its basic mode your mission is to just fend off waves of enemy ships that are trying to destroy you and your starbases. We have found that upping the difficultly level and setting the Sector setting to something other then “Barren” makes for quite an interesting game. You can also play in “Elite Co-Op” mode which lets a total of 6 ships (each with 6 players) play together which sounds like it would be awesome.

Over the last few months we have played with a number of different groups of people. I’ve been constantly surprised at how everyone gets drawn into the game (even the non Sci-Fi/geeky ones) and just how much fun it is. I would recommend that everyone give the game a go.

And just to set the record straight… the reason the Artemis was destroyed was that engineering did not fix the engines in time. It had nothing to do with the fact that I reversed the ship into the mine field we had just laid!

Update: Version 2.0 of Artemis was released last week and it features a ton of new features including: